This garden won 2 Highly Commended awards in the Landscaping Victoria 2017 Industry Awards for Natural Built Environment and the Grant Saltmarsh Feature in the Landscape.

A new garden was required to blend in with a newly built weatherboard home in Upwey. The site had been deeply cut so a retaining wall was required. Originally, a sleeper wall was considered, but the clients didn’t like the idea of a straight, ugly sleeper wall. They wanted something more natural-looking, with rocks; a pond or billabong in one corner also appealed. They wanted a native feel, and liked the idea of attracting frogs to their new garden. 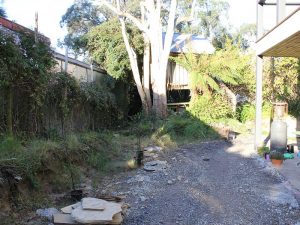 There were some existing elements that needed to be incorporated into the design, including a rectangle of Castlemaine crazy paving on the patio and some existing plants such as an 8m tall dead eucalypt that looked very architectural , a Dicksonia antarctica, and various Rhododendrons, Magnolias and Crepe Myrtles.

Some unsightly neighbouring sheds needed screening and drainage need to be considered due to the steep slope and deep site cut.

One major challenge with the project was the tight access. A large excavator was required in a tight space next to a house and there was only one way in, and one way out. As a result, progress was quite slow. 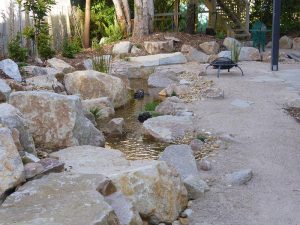 Careful consideration was made to the placement of waterfalls so that they would be most appreciated from inside the house. As a result, the waterfall starts outside the rumpus room and flows into a long winding stream. The stream turns at a particularly large sitting rock, and flows under a rustic timber bridge before disappearing into its reservoir.

Granitic sand pathways were created for a natural look, and also to aid in water drainage. The stream is connected to various storm water pipes, so that the system is topped up when it rains. The water also gets filtered, before it can then overflow into the actual storm water system. 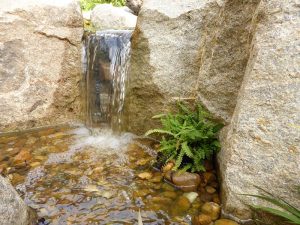 epers that the client had in the garden were re-purposed into a bridge across the stream.

The stream was designed to be interactive. Parts of the gravel path travel up to the water’s edge, a bridge crosses the water, and there is a stepping stone to a large sitting rock under the gum tree. There are numerous sitting rocks where the clients can sit with their feet in the water.

The client had excess Castlemaine slate pavers on-hand that were used to smooth the transition between the gravel path and the paved patio. 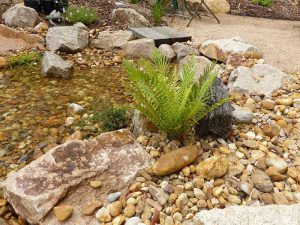 Predominantly native plants were chosen – but those with broader foliage so as not to look too different from the existing exotic plants. Three water gums (Tristaniopsis laurina ‘Luscious’) were planted, and lilly pillies (Syzygium ‘Pinnacle’)  were used for screening of the neighbouring shed. Various native reeds, ferns and groundcovers were planted directly into the creek, while Lomandra ‘Lime Tuff’ was chosen for its foliage and colour contrast. The palette was mainly green, with a spots of colour provided by Chrysocephalum, Scaevola and Brachyscome.

Following the construction of our home, the yard was left very muddy and uneven. After to talking to a number of ‘landscape designers’ we came across Ben Harris who listened to our desires to have a yard that invited relaxation and tranquillity. We wanted to enhance the local flora and fauna and so wanted someone who could work creatively with natural materials. Ben went through his ideas with us to ensure we could visualize it. He and his team worked diligently; they were meticulous in their planning and execution of the job. Our yard has been transformed; it looks like a natural extension of the surrounds. Thanks Ben & team !

I design and build natural water features inspired by the beauty of nature. 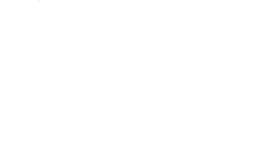